Working with a child of any age is both fun and challenging at the same time. In this installment of our series on age-specific platform tennis issues for teaching children, we will focus on pre-school and kindergartners.

Ask any parent to describe their children at four and five years old, and you can be certain that increased socialization will be included in their description. Children at that age start worrying about what their friends think and feel about them. This socialization is a big part of a child’s development, and it greatly affects how parents and other adults work with children this age on a tennis court.

At ages four and five, when groups of children are left alone to play, the largely random play of younger children advances to the beginnings of group games and sports.

In this age bracket, there are specific contrasts between boys and girls. As compared to girls, here is what the average boy will be like. He will:

Girls, on the other hand, will:

At this age, the children still largely disconnect from consequences that are not connected immediately to gratification. In other words, they still want immediate pleasure when possible. Yet, unlike the two and three-year-olds of our previous installment, their behavior is also motivated by more awareness of their place among their friends or other children around them.

But note, that they are just in the beginning stages of their social development. Some children will be more concerned with it than others, and girls, in particular, will be more socially aware than boys.

Parents starting their children with platform tennis in this age bracket have to decide whether to sign them up for private or group lessons.

Generally speaking, children of this age will be more motivated by groups of children their own age, in part because it is inevitably more fun, complete with laughter, making friends, and team games that create group enthusiasm difficult to replicate in a private lesson.

If you are thinking group lessons, however, due to the vast behavioral differences between boys and girls, I would strongly recommend dividing boys and girls of this age into separate groups as far as possible. If this isn’t possible, at the very least have even numbers of girls and boys so they can be subdivided within each group.

The opposite would be a group lesson with six children, five boys and one girl. What are the chances of the lone girl wanting to come back for more?

At this age encourage cooperation, manners, attitude, and effort.

Although it is always tempting to have contests and competition with winners and losers, avoid it. Since the children in this age group are becoming more and more aware of how they stack up in comparison to their peers, you want to make sure that the fragile egos of these children remain intact. 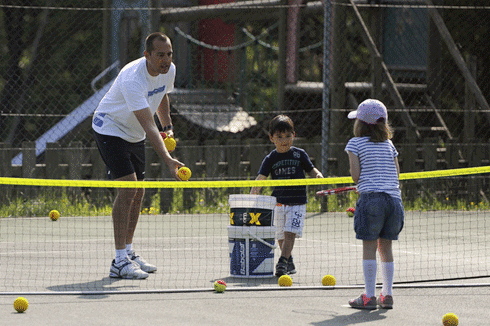 If they show up for a session at three o’clock and leave at four, absolutely make sure they feel good about themselves and how they did. This means that each child must walk away feeling like a winner.

The responsibility for this falls in the hands of the adult supervisor.

Creating activities where each and every child comes out a winner or, at the very least, ends up moderately successful is the challenge of teaching. Often the simple key to keep in mind is to not try to accomplish too much. Keep it simple.

For example, watch a soccer game with children at ages four and five, and it becomes immediately clear that very few understand position, passing strategy, or skills beyond running and occasionally kicking a ball.

If you do create simple competitions, I recommend giving prizes to all participants, regardless if they win or lose.

Experts generally say that children in this age group need instructions limited to one or two points for games or drills. And, although many exercises will work well for both boys and girls, there are differences to keep in mind to help everyone have more fun.

For example, as compared to girls, boys will enjoy less structure, less control, more power, and overall an environment that will appear somewhat chaotic. 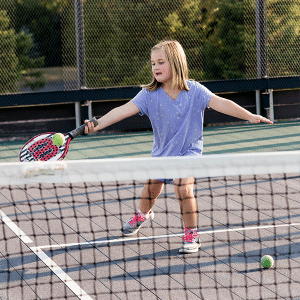 Girls, on the other hand, will handle structure better than boys. And, due to their stronger verbal ability and social skills, adding elements of the children cheering one another on, and even calling out simple tips to one another will work.

An example would be for the children to call out “happy feet” to keep each other’s feet moving.

Also remember that girls can also tend to lock onto one other child in the group and exclude others. Therefore, it is important to constantly rotate partners to avoid any individual from feeling left out.

The final tip for this article is to discuss the length of the class, whether it be a private or a group.

The overall guideline is fun, anything you can do to get them asking for more, to be eager for the next class. But, as a general rule, group classes at this age should last no longer than 40 minutes. For private lessons, 30 minutes should be plenty.

Finally, if they are having a blast and, at the end of a class, are nagging you for more, don’t give in. Better to keep the carrot dangling so they are eager to come back for the next session. 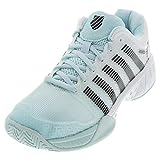