Skip to content
Where Did Platform Tennis Come From?

Platform tennis is predominantly an American sport which is played by 1000’s of people across the USA. Mainly played in private clubs, communities and public areas, it is a highly competitive game and very addictive.  Players of all ages enjoy platform tennis and flock to the courts every year when the weather turns too bad for outdoor tennis.

Where Did Platform Tennis Originate? 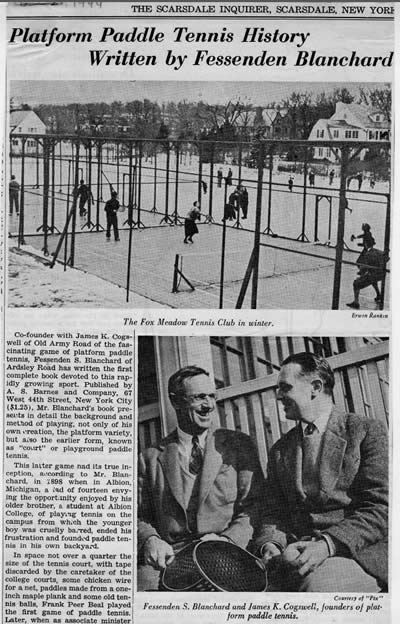 The sport was invented by Fessenden Blanchard and James Cogswell at Cogswell’s home in Scarsdale, New York.  They wanted to play tennis in winter, so in 1928 they built a small raised court on the side of Cogswell property (on a hill) and after constantly loosing the ball, added fencing.

Paddles were bought by James Cogswell from a local store and the sport of platform tennis began.  Initially the fencing was there to simply stop them losing balls, but after a while it was agreed that they added a dimension to the game by playing the ball off them.

There have been a few minor changes over the years, the court got a little bigger, under decking heating was added to make it a year round sport and lighting is very common, allowing players to play on dark winter evenings.

Paddle is generally a doubles sport with two players on each side of a 34” high net. Rules of the game are identical to tennis with a few exceptions: only one serve, serves that touch the net are played, and what many consider the best thing about paddle — the ball can be played off the screened walls.

Surrounded by a 12 foot high fence made of heavy gauge wire, platform tennis is played on a raised court roughly the same size as a badminton court (44 foot long x 20 foot wide).  The court is raised so underfloor heating can be installed to allow the game to be played in all weathers, even the snow.  The fencing not only stops you loosing the ball, but it is used as part of the game, where players can play off the walls, as they do in squash and racquetball.

Platform tennis equipment consists of a paddle, ball and shoes.  The platform tennis ball, which measures 2.5 inches in diameter, is very similar to a standard tennis ball with a yellow flocking material attached to the rubber ball to stop it from skidding, and produce an even bounce.

A platform tennis paddle is made of graphite, carbon fibre or other composite materials and has holes drilled in to the head to improve aerodynamics.  You can have up to a maximum of 87 holes in the head of the paddle and it measures up to 18 inches in length.

Platform tennis shoes, like any sports shoes, are important to your game.  Ankle and foot injuries are common in any form of tennis, having a decent paddle shoes is not just going to help you win, but they will keep you playing week and week.

According to Dick Squires, author of How to Play Platform Tennis, “Patience and ball placement are more effective assets than sheer power and speed.” when you are planning your platform tennis game strategy.

The Name of the Game

“Paddle” refers to ground-level “platform tennis.” The sport adheres to the rules and equipment specified by the American Platform Tennis Association. It is NOT the same as “paddle tennis” – a West Coast beach sport. It is NOT the same as “padel” – much like paddle tennis, invented in Mexico in 1968. It is NOT “paddleball” – an urban sport played against a single wall. And it is NOT “pickleball” – basically ping pong without the table.